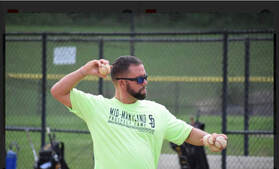 ​
​Coach Sean Davis, a year 2000 graduate of Sherwood High School, was a two year First Team All-County selection while playing for Coach Billy Goodman. Upon graduation, Davis continued his playing career at Frostburg State University. While at Frostburg he earned All Conference all four years. In 2003 he was first-team All-ECAC and third-team ABCA Mid-Atlantic Regional All-America honors. He compiled a .349 career batting average and finished as the school’s all-time leader in hits, runs, at-bats and games played.  Coach Davis was voted into the Frostburg State University  Athletic Hall of Fame in 2022.
Coach Davis has been the head coach at Sherwood High School since 2012 and has been coaching high school baseball since 2005. At Sherwood Coach Davis’ teams have amassed a 169-37 record with 8 division titles and 5 region titles.  During his time at Sherwood 42 of his athletes have gone on to play at the collegiate level.  In 2021 he lead the Warriors to the Maryland 4A State Championship and an undefeated season. He has twice been voted Montgomery County Coach of the Year and MSABC has selected him as Regional Coach of the Year 3 times. In 2021 he was selected as the NHFS Maryland State High School Coach of the Year. The Warriors also captured the 2022 4A State Title to become the first school in 4A history to win back-to-back championships. Coach Davis has been a teacher in Montgomery County Public Schools since 2005. He resides in Olney with his wife Jenny, daughter Peyton (10) and son Grant (7).